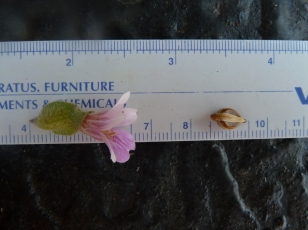 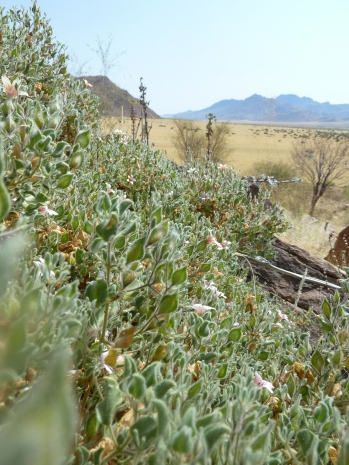 You are looking at one of the most special plants in the world–really–lucky you to have stumbled upon this page! Here it is, Petalidium subcrispum, locally dominant and covering the bases of the Hartmann Mountains that flank the western margin of Marienflüss (looking north, the Angolan border is a mere 10 miles away).

But it grows nowhere else. That’s it: a local endemic, and as endemic as it gets.

We aren’t talking about subtle differences in morphology, here. This is a bona fide GOOD species: it isn’t confusable for anything else on Earth. Its floral syndrome suggests bee or other insect pollination. Purple flowered.

But here is the best part: its sister species, Petalidium subcrispum (red flowered, bird pollinated), grows abundantly just a couple of miles away — across the valley (Marienflüss), and flowers at the exact same time. Does pollen travel that far? Do the insects or birds that carry said pollen travel that far? If so, what maintains species boundaries? Kyle and I have been to the amazing Marienflüss three times now and have never seen a hybrid. This is a perfect in situ experiment for an eager graduate student who wants to escape to one of the more remote corners of the world. Maybe I’ll go back to grad school…..