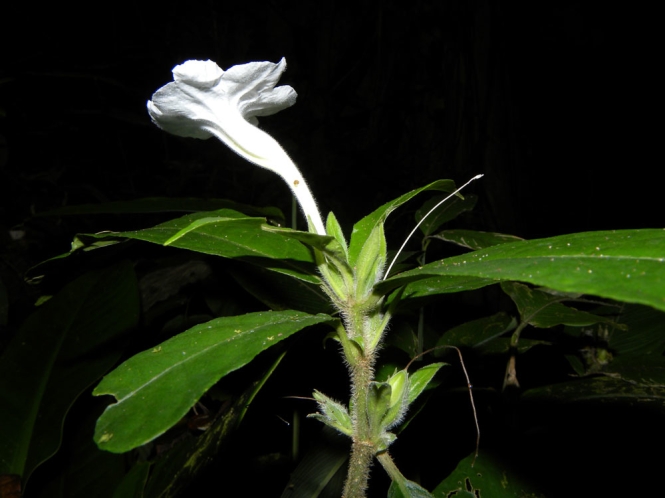 Every species has a story – I feel pretty lucky to have stumbled upon an amazing genus for which one could literally make a new discovery every day. Here is one example. Ruellia odorata first “came to us” during a period in which Lucinda and I were reviewing “problem” specimens, in preparation for the Ruellia treatment of Acanthaceae in Flora of Costa Rica. Through some herbarium sleuthing, we determined that this was one of four species that needed to be described as new to science, from Costa Rica alone.

[some number of years pass…]

We receive in our email inboxes an image of a mystery plant… a white flowered Ruellia from the western slopes of Costa Rica. I knew it immediately: Ruellia odorata, which we had described based only on herbarium material. The photo was a dead ringer, and I was happy to finally see this species “in the cellulose.” HUGE thanks to Reinaldo Aguilar, for sharing this with us.

I don’t know if you can see it, but on the photo I can see a small hole in the corolla tube, near the junction of the “narrow unexpanded portion” and the “expanded portion” (see McDade & Tripp 2008, Brittonia, for corolla terminology). This is most likely the result of nectar robbing by a hummingbird. They like to drill holes in floral tubes and steal the goods. Hence, botanists call them “illegitimate floral visitors.”