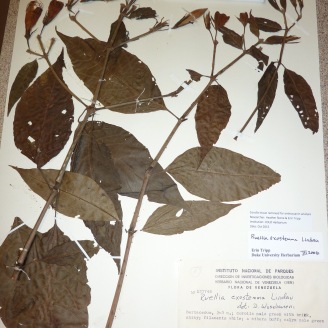 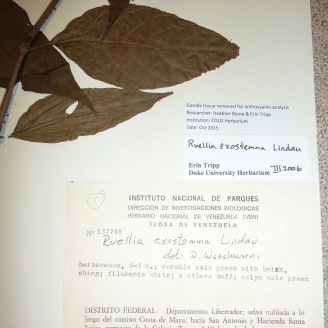 Ruellia exostemma is (was?) an erect shrub endemic to Venezuela, known from 18 total collections primarily in the state of Yaracuy. It grows (grew?) in cloud forests between 1200–1800 m elevation. Like many other Ruellias found at this elevation, Ruellia exostemma is adapted to bat pollination and its large, yellow, gibbous, nocturnal corollas will convince you of such.

The 18 documented collections represent 10 populations (Tripp & Luján 2017). Of these, half were made prior to 1980. Of the remaining half, most derive from areas that are within or near current logging concessions. In 2009, my colleague and dear friend Manuel Luján and I searched for populations of this species in the vicinity of El Amparo and Candelaria, Yaracuy. This area held one of the most recent and extensive populations of Ruellia exostemma as documented in herbaria: labels noted that plants occurred in ‘virgin cloud forest’. We visited the site in 2009 and found the area to be completely leveled – deforested and devastated beyond any foreseeable means of ecological recovery. A bona fide dustbowl, in fact. Not a sliver of anything green, anywhere in sight. And for this, for everything, our species is truly out of tune.

In our monograph of Venezuelan Ruellia (Tripp & Luján 2017), we considered all ‘modern’ (post 1980) populations to be at high risk of extirpation and assessed the species as Endangered under IUCN (2014) criteria EN B1a,b(iii) and B2a,b(iii). The reality is that I do not think I will ever have the privilege of seeing this one alive. In the business of biodiversity, you win some and lose some. In the 21st C, it feels like more losing than winning.

“As freezing persons recollect the snow, first chill, then stupor, the letting go.”