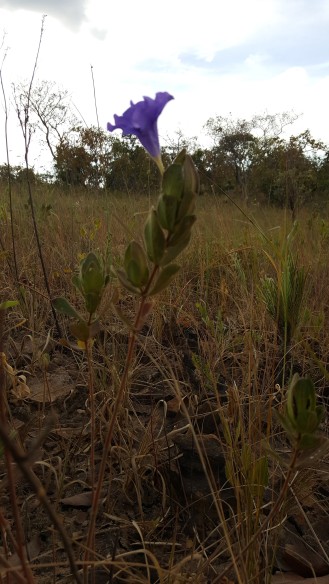 We found Ruellia helianthemum on one of the most memorable days of my life. Cíntia’s student Rodolfo tipped us off to a remarkable landscape full of sympatric Ruellia species not far from Cavalcante, north of Parque Nacional Chapada dos Veadeiros. We pointed the car in that direction and with only a half glow of remaining sunlight, punched it 130 km as fast as possible. We landed in the most spectacular landscape of mixed campos rupestre and cerrado and found nothing short of 5 sympatric Ruellias.

Ruellia helianthemum is a most distinctive species and one that I suspect was named as such because of the dense, golden trichomes that characterize leaf surfaces (this population densely pubescent but not so golden). We found this species in abundance on flat, sandy soils, about 60 km W of Cavalcante, en route to Serra do Tombador. The plants were extremely sticky-glandular and fruits were severely predated.

What a GREAT day.