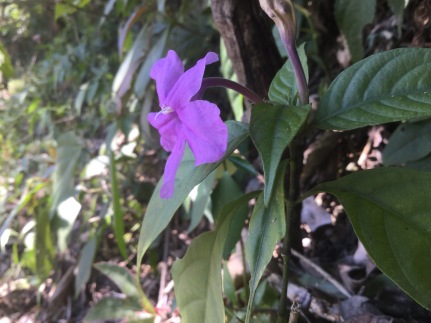 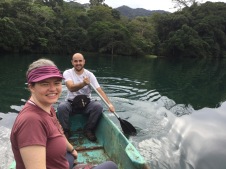 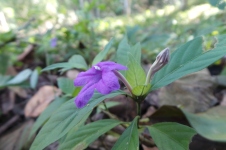 Curiouser and Curiouser! Alice must have been talking about the first time she saw Ruellia matagalpae in the field. A strange bird with a strange flower morphology and color. Its wickedly narrow floral tubes beg butterflies to pay a visit (and had I stopped to ponder longer, I might have an answer for you).

Ruellia matagalpae occurs from Chiapas, southern Mexico to the Cordillera de Guanacaste, extreme northern Costa Rica (see new country record reported in McDade & Tripp 2008, Brittonia), where it inhabits the understories of semi-evergreen forests. Alas, you’ll most likely find plants scrambling up and the meanest, steepest slopes… just like the rest of the genus, and any fine botanist.

Before seeing this species in the cellulose, i.e. based on herbarium specimens, I predicted that this species would be placed phylogenetically proximal to Ruellia yurimaguensis and R. tarapotana (from Peru and western Brazil) as well as R. tubiflora (from northern South America, primarily) based on its ovate to elliptic, greenish-white, leaf-like bracts that subtend the sessile dichasia. Every now and then, I get it right: in Tripp (2007, Systematic Botany), you can see that in fact Ruellia matagalpae is a fairly close relative to these species.