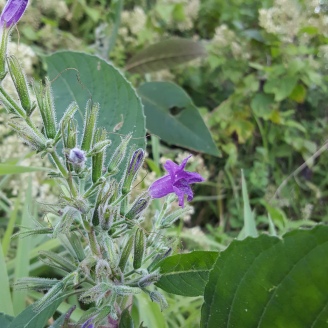 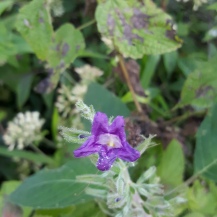 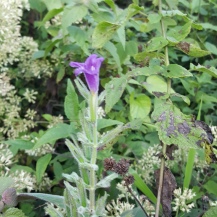 This was one of those evenings never to be forgotten, ever.

Late in the afternoon I convinced my traveling companions to park the car and go walking towards the summit of one of my favorite kinds of habitats in the Neotropics: las microondas. As I write, I can see Nico cringing with his perfect Spanish: they are microwaves… they are communication towers. But, he’ll survive.

Across Latin America, roads that go to summits containing microondas towers are generally special – they host lots of fine habitat and few people. A little trick I learned from many Mexican Acanth collections of Tom Daniel.

I had a strange feeling about this one. We had been walking on the road and around the forest for about an hour. I didn’t find “that special something” I was after, and sensed Nico and Cíntia had already turned around for the car. I hadn’t yet reached the summit. But I had a feeling that I should keep going.

Pushed it forward at a near running pace. The habitat changed… something of a lower montane cloud forest, leaves thick, coriaceous. Definitely not Acanth habitat.

Just shy of the summit I laid eyes on it. I let out an audible ohhhh my goddddd then “froze and marveled at the smashing nonchalance of nature”.

It was a new species without any shadow of doubt. I sprinted down the mountain towards Nico and Cíntia. They drove to the top, met me, and we very rapidly processed the collection (spectrometer, tissue sampling, etc.) in the last few moments of daylight.

This species is so beautiful: BIG, DARK PURPLE corollas, with a prominent narrow tube and yellow nectar guides. The leaves and stems are covered by a soft indumentum of PURPLE (that’s right, purple) trichomes. AND to top things off, it is almost certainly in the Ruellia inundata clade – among my favorites!

I should like to name this one Ruellia microondas.

One thought on “Ruellia sp. nov.”