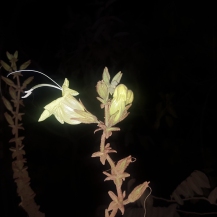 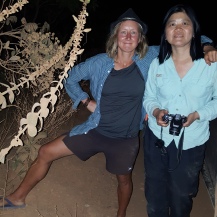 I have been putting off writing about Ruellia verbasciformis because the prospects were too overwhelming. The grandeur of this species is too much for me to understand and makes me feel small. What can I say, sometimes this biodiversity business is emotional.

But I will try.

Ruellia verbasciformis is huge, commanding, beautiful bat-pollinated species endemic to Goiás (there might be one or two records from adjacent Mato Grosso?), Brazil. I have known the species for some time through herbaria (thru the evenings, mornings, afternoons….). But seeing it in the cellulose outside of Parque Nacional dos Veadeiros in August 2016 was a life changer.

The flowers of this species are massive. They open at night and light up the sky. All reproductive parts of the plants (namely: inflorescence branches, bracts, calyces) secrete an immense quantity of oils. The population we studied was so oily that we were forced into using wet wipes as we worked with the tissues (spectrometry, sampling) and made meager attempts at capturing the experience with photographs.

Phylogenetically, Ruellia verbasciformis is strongly supported as member of a lineage of shrubs endemic to Brazil that includes R. adenocalyx, R. incomta, R. salviifolius, and R. tomentosa. It is, however, the only species among these to have evolved bat pollination. I do not yet know if is ancestral or derived within this clade, though my expectation is the latter.